Cannabidiol (CBD) is a phytocannabinoid discovered in 1940. It is one of some 113 identified cannabinoids in cannabis plants, accounting for up to 40% of the plant’s extract. As of 2018, preliminary clinical research on cannabidiol included studies of anxiety, cognition, movement disorders, and pain. 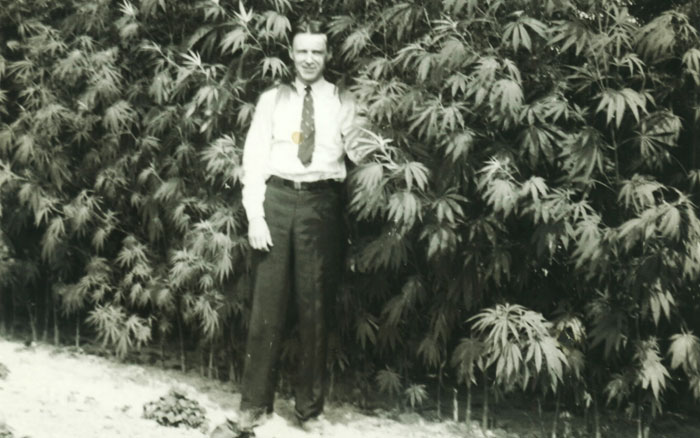 Cannabidiol can be taken into the body in multiple ways, including by inhalation of cannabis smoke or vapor, as an aerosol spray into the cheek, and by mouth. It may be supplied as CBD oil containing only CBD as the active ingredient (no added tetrahydrocannabinol [THC] or terpenes), a full-plant CBD-dominant hemp extract oil, capsules, dried cannabis, or as a prescription liquid solution. CBD does not have the same psychoactivity as THC, and may affect the actions of THC. Although in vitro studies indicate CBD may interact with different biological targets, including cannabinoid receptors and other neurotransmitter receptors, as of 2018 the mechanism of action for its biological effects has not been determined.

In the United States, the cannabidiol drug Epidiolex has been approved by the Food and Drug Administration for treatment of two epilepsy disorders. The side effects of long-term use of the drug include somnolence, decreased appetite, diarrhea, fatigue, malaise, weakness, sleeping problems, and others.

The U.S. Drug Enforcement Administration has assigned Epidiolex a Schedule V classification, while non-Epidiolex CBD remains a Schedule I drug prohibited for any use. Cannabidiol is not scheduled under any United Nations drug control treaties, and in 2018 the World Health Organization recommended that it remain unscheduled.

How CBD Products Are Made

To extract CBD-rich cannabis oil, one must start with CBD-rich plant material. There are many ways to extract oil from the cannabis plant, each has its pros and cons. Some methods are safer and more effective than others. Cannabis oil made with neurotoxic solvents like butane and hexane may leave unsafe residues that compromise immune function and impede healing. 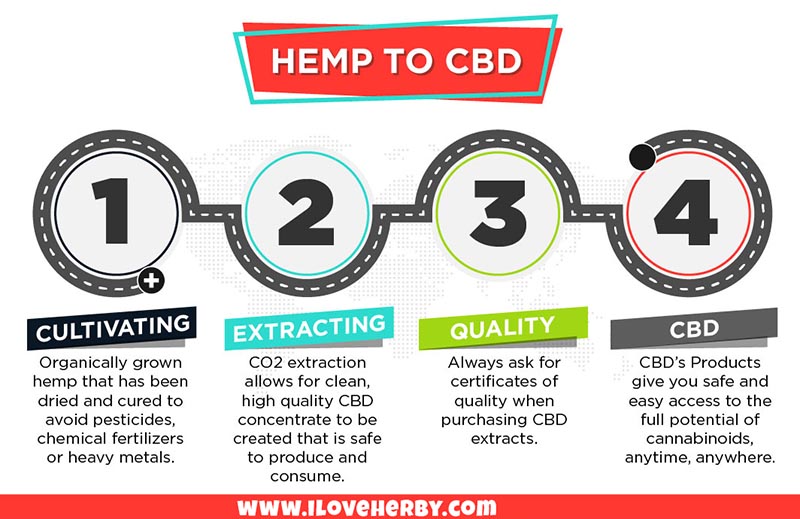 Cannabinoids like CBD have a strong interaction with chromatography media, thus traveling slower than unwanted plant material like chlorophyll which has a weak interaction. Once divided, cannabidiol and other terpenes can be isolated and undesirable plant material can be disposed of.

Herbily Ever After® CBD oil products also undergo a process called decarboxylation. This involves heating the cannabinoids into a form that allows the cannabinoids to immediately interact with the endocannabinoid system making the compound more usable throughout the body. When the extracted oil is decarboxylated, the essential CBD oil solution converts from CBDA to CBD, thus removing the acid form so it’s readily bioavailable. Once decarboxylated, the oil can be consumed directly, however it may not have a favorable taste. Instead, this oil can be mixed with a carrying oil such as hemp seed or coconut oil, turned into capsules, or hardened into an isolate form for consumer use.

What is Hemp Oil? 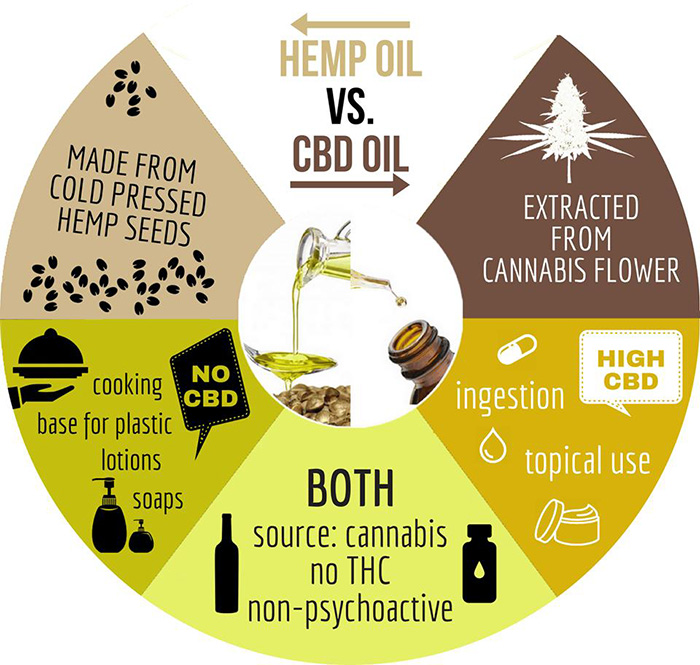 Hemp oil is filled with ingredients to keep your body balanced. Hemp oil is:

Hemp is a source of cannabidiol (CBD) in preponderant amounts (usually up to about 4% of the dry weight of the hemp biomass), but hemp-seed oil can contain negligible or smaller amounts of CBD.

We at Herbily Ever After® promise to never use hemp-seed oil in any of your Herbily Ever After® wellness supplement products. Hemp-seed oil may contain traces of THC, as well, usually less than 0.3%, and it does not have any psychoactive properties. Less than a 0.3% concentration is the legal limit for hemp oil contents of THC. Many hybrids of cannabis have been produced by special selection and growing techniques where CBD contents of hemp can be increased to about 14% of CBD per dry weight of the hemp in question.

The Endocannabinoid System and How it Works

Research into the effects of cannabis led to the discovery of a biochemical communication system inside of the human body. The endocannabinoid system, as it was so named, is a collection of cell receptors and corresponding molecules that help to regulate sleep, appetite, mood, motor control, immune function, pleasure, pain, physiology and other everyday experiences. When the endocannabinoid system is in balance, one experiences homeostasis. Endocannabinoids are the molecules that act as chemical messengers that bind to cannabinoid cell receptors and tell the body to do certain things. The human body naturally produces endocannabinoids with the help of consuming foods like fatty acids found in nuts and fish. The 60+ cannabinoid molecules found in cannabis also can bind to cannabinoid receptors. Although different cannabinoids (like CBD and THC) cause different effects, they work through the same system of molecular messages sent throughout the body.

Full Spectrum and the Entourage Effect

Some CBD oil products on the market are limited to CBD explicitly while others advertise their product as “full spectrum” meaning it contains other cannabinoids such as CBN, CBC, and THCA. A wider range cannabinoid spectrum can aid in what is known as the entourage effect, which is the scientific belief that cannabinoids have greater potential when working together rather than acting as a single molecule. The interaction of more than one cannabinoid stimulates the endocannabinoid system and the molecular interaction.

When choosing your medicine, be aware that there will be a price and taste difference between “ Herbily Ever After™ CBD Oil’ and “ Herbily Ever After® CBD Full Spectrum Oil”. Not everyone needs or desires the full spectrum of cannabinoid molecules in their wellness regiment; the choice is yours.

SHOP CBD CBD FAQ Is CBD Legal & Safe? History of CBD 3 Types of CBD What Can CBD Do For Me? CBD Dosages Why Herby CBD?
Copyright © 2019 TM Organik - All Rights Reserved.